11th DemDebate – Back to Civility? 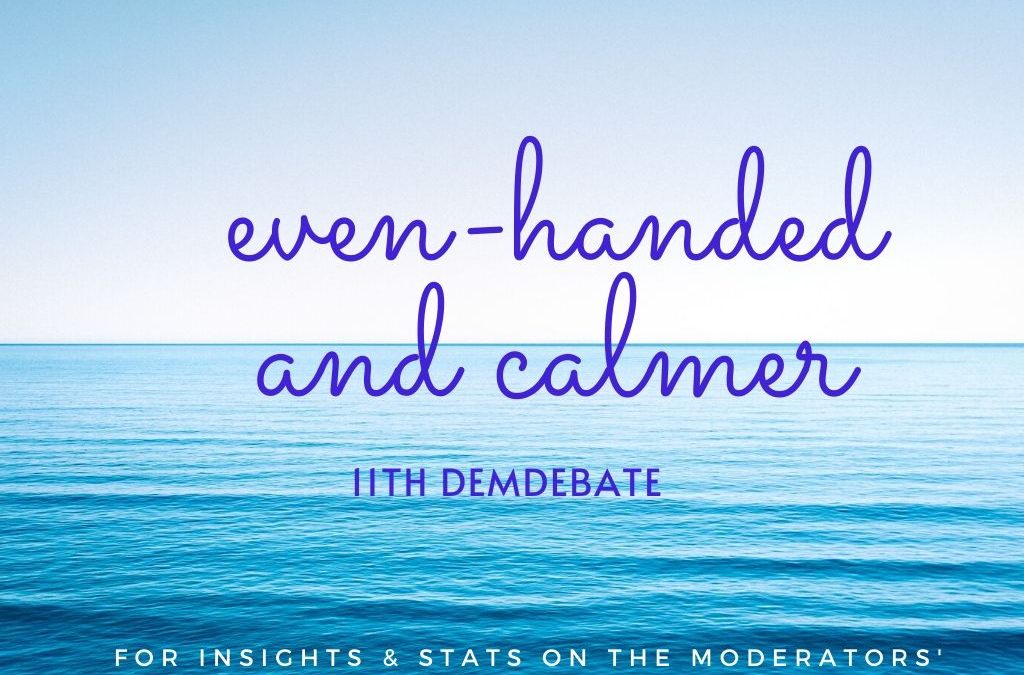 This may be the last Democratic Party Primary Debate.  Moved from my hometown of Phoenix to Washington DC – with minimal staffing and no audience.

It was indeed, different.

Yes.  The New York Times expected “fewer zingers and zippy sound bites,” but those that were delivered (“People are looking for results vs. a revolution,” or “It’s good that you had that idea 30 years ago”), just sounded flat.

CNN intentionally spaced the podiums (technically, they are called “lecterns,” but who am I to quibble with CNN?)  six feet apart in accordance with “social distancing” rules – but it reminded me of the first televised Presidential debate between Nixon and Kennedy in 1960 (I wasn’t even born yet, but I’ve seen video.  They were sitting in chairs with the moderator in between the two).

Although the two candidates are accustomed to the immediate reactions of the crowd during a debate, this format tempered their passion, vitriol, and snarkiness of the last debate.  But hey, they went from seven to TWO in a manner of three weeks – so the dynamics were bound to change. And I believe it worked in the best interests of both candidates:

My fear was that the moderators would pander to the front-runner, Vice President Joe Biden.  But that is not the case.  This was the most consistent, equitable and fair distribution of airtime, number of questions, and opportunities to respond and rebut to a question than any other debate in the 2019-20 season:

Good news: The ground rules changed from 75 seconds for an initial response to 90 seconds – with 45 seconds to rebut or respond.  Wow!  That will allow more time for substantive discussion of the issues, right?  AND the Moderator Jake Tapper encouraged a “conversation between the two of you.”  That was just code word to “keep talking…I’ll let you answer the question, not answer the question, pivot to another topic or just keep talking….as long as you don’t go over time.”

RARELY did they follow up on a question. Although Moderator Bash identified a newsworthy bit when she confirmed with Biden that his VP nominee would be a woman.  She then queried Sanders who said, “in all likelihood, it would be a progressive woman.”  Huh?  That would warrant a follow-up question.  Or the question to Biden about his position on Sanctuary Cities.  He replied, “No.” with no follow-up explanation.  Huh?  Tell me more Joe!  Perfect time for the moderator to intervene.

Much of the immediate post-conversation about this debate was that this was a “spirited back and forth” about “substantive issues.”   Let’s talk about each of these:

Yes indeed. The coronavirus is at the forefront of most of our minds and actions so I would not be surprised if this is the last Democratic Primary Debate for 2020. Therefore, the next debate will pit each party’s candidate for the Presidency on Tuesday, September 29th.  I’ll be reporting on that debate as well!