“A Panel of Five” Moderators for the First Democratic Primary Debate!? 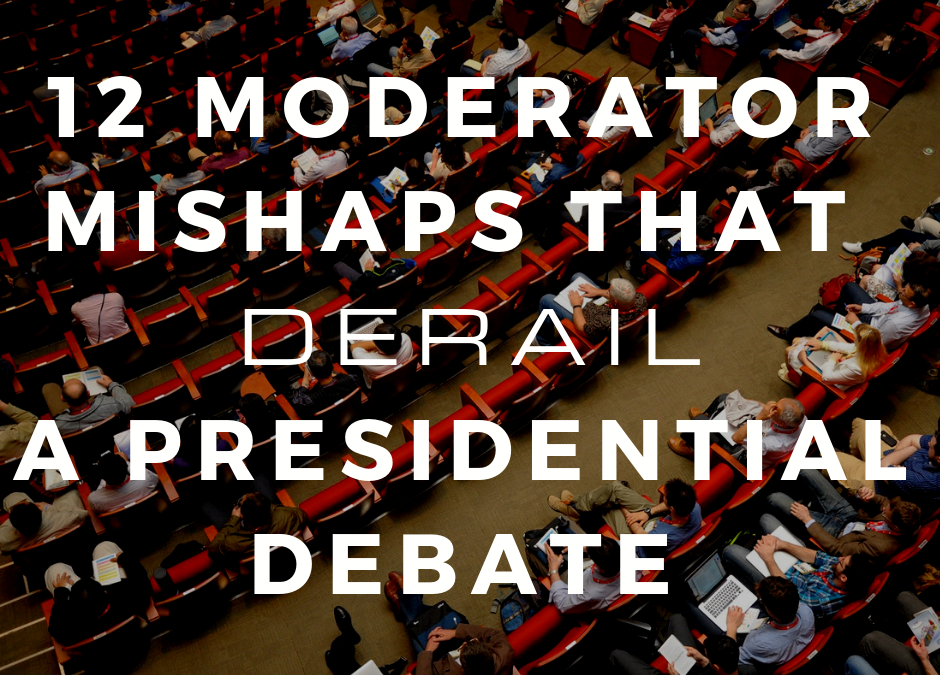 For this presidential debate cycle, the country has been focused on who will be able to stand at the candidate lecterns. Yet there is an equally important component to having a successful debate: the skill of the moderator(s) that facilitate that informative discussion.

While the prevailing party or the Commission on Presidential Debates set the dates, the candidates, moderators, the general format and topics to be discussed, the debate moderator(s) are in charge of running the debate.  They pre-select the questions, ask the questions to the candidates, engage the audience which keeps it lively and interesting.  And they do this all on behalf of the audience and the primary objective – “a structure where we want to give everyone a fair shake to communicate their vision to the American people.”[i]

Dylan Byers (formerly at Politico and now at NBC) said, “The cardinal rule of debate moderation is this: it isn’t about the moderator.”  Amen!  When the moderator is skilled, fair, equitable, and objective, the candidates will have an interesting and informative discourse about the relevant issues of the day.

But here’s the interesting part: moderators only get mentioned when they haven’t done a good job.  It’s assumed that they will facilitate a fabulous event; however, that is not always the case.

Here are a dozen ways the moderators have failed the audience from the last three election cycles:

1) Start Stupid. Anyone who has given a speech or moderated a panel knows that you have to start strong.  You have only a few moments to grab the public’s attention so they will be willing to curl up with a bag of popcorn and listen to what the candidates have to say.  It also sets the tone for the rest of the event.

October 2015, 3rd Republican primary debate: Moderator Carl Quintanilla “cutely asked each candidate, as though they were in a job interview, to admit to a weakness of character or somesuch.  It was a gimmicky and rather puerile inquiry, of course, and predictably few of the contenders even bothered to address it.”[ii]  The moderators never recovered control of the debate (as you will see further in this article!).

January 2012, last Republican primary debate before the South Carolina primary: Moderator John King opened with a pointed question to Newt Gingrich about whether he had been asked to enter into an open marriage. Gingrich, in typical form, spent three minutes scolding King for choosing to open a Presidential debate with such a deeply personal subject. [iii]
“The incident resulted in a great amount of applause for Gingrich, and was widely broadcast on YouTube. It was also credited with raising Gingrich’s support in South Carolina, leading to his win in that state’s primary two days later.”[iv]

2) Fail to Start on Time. October 2015, 3rd Republican Primary Debate inexplicably started 15 minutes late: “Before the candidates even took the stage at Wednesday night’s Republican presidential debate, the network hosting the debate was getting pilloried on social media. As the 8 o’clock Eastern start time came and went, CNBC’s pre-debate pundits kept droning on. And on. And on. It wasn’t clear why. There was no countdown clock on the screen or indication of when the show might begin.”[v]

3) Screw Up the Introductions. February 2016, 8th Republican Primary Debate: As the moderators called out the candidates one by one, Ben Carson failed to hear his name called, so he waited patiently as other candidates walked on.  He didn’t even see the show producer behind him motion for him to go forward.  “It was quite possibly the most awkward debate introduction in American history…The order got so botched that the debate seemed poised to start without Ohio Gov. John Kasich even being introduced. New Jersey Gov. Chris Christie volunteered to do the introduction himself.”[vi]
A sample tweet sums it up nicely: “If they can’t go out in the correct order, how can they stand up to Putin?”

4) Forget to Follow the Established Process. Larry King moderated the October 2012 third party candidate debate.  “Twenty minutes and three questions into the debate, the candidates pointed out they hadn’t yet been given the chance to deliver their opening statements. Oops. While some on Twitter didn’t mind the loss of ‘generic’ opening speeches, others saw the mishap as evidence of the debate’s irrelevance.”[vii]  King’s response?  “It was not in my notes about an opening statement, so I apologize. … I’m a Jewish guy from Brooklyn; we do what we’re told.”[viii]

5) Ask Bad Questions. It is the sole purview of the debate moderators to formulate, sequence, and ask the best, most appropriate, thought-provoking questions that they can squeeze into a limited time.  In preparation, the moderators should agonize over the exact wording, timing, and tone of each and every question.  According to journalist Jacob Leibenluft, “Moderators are often given carte blanche as to what they’ll ask candidates…[with] ‘near-absolute control’ over the questions.[ix]  So it’s surprising (and downright distracting) when there are inappropriate, embarrassing, and/or irrelevant questions that pop up.  Some examples:

6) Fail to Know Your Stuff. Moderators should have a sufficient depth of understanding of the topics and the line of questioning in order to skillfully facilitate a discussion of the issues.  October 2015 Republican Primary debate: Moderator Becky Quick “got blindsided when she asked Trump about something he supposedly said about Facebook chief Mark Zuckerberg’s immigration policies, and Trump told her he never said it.
‘So where did that come from?’ Quick pleaded lamely.
‘I don’t know. You people write this stuff,’ Trump retorted, to laughter.
As Quick pointed out 20 minutes later, it came from the immigration policy paper on Trump’s own website.”[xv]

7) Stay Shallow. When a candidate fails to connect the answer to a question which the audience truly cares about, a skilled moderator will dig deeper and ask a follow-up question. December 2007 Republican Primary debate: the New York Times reported, “We were a bit disappointed that the moderator, Carolyn Washburn…decided to forego asking questions about the two I’s [immigration & Iraq], asserting that Iowans already know enough about the candidates’ positions on those issues. But do they? Can they parse what Mr. Romney’s saying in his ad about Mr. Huckabee on immigration? Shouldn’t Mr. Giuliani and Mr. Romney be allowed to say more about their differing views?
Wouldn’t voters like to hear a little bit about what Senator John McCain has to say about reports of possible success for the so-called surge (troop buildup) in Iraq and what that means for the country, let alone the campaign?…We wished for challenges to some of the statements made, too, or follow-up.”[xvi]

8) Debate the Candidates. Although moderators should dig deeper and ask provocative follow-up questions, they should not argue with the candidates about their answers. October 2012 Presidential debate: moderator Candy Crowley corrected Mitt Romney for his assertion that President Barack Obama did not refer to the consulate attack in Benghazi as an “act of terror.”  The resulting exchange about the veracity of his comment continued for about another minute.  “Candy Crowley stole the spotlight when she decided, on a whim, to fact-check the candidates.”[xvii]  Romney should have been debating Obama – not the moderator.  In hindsight, even she “seemed to acknowledge that she had erred. Romney was ‘right in the main’ but ‘picked the wrong word,’ she said on CNN.”[xviii]
Depending on the importance and time available, a skilled moderator could intervene and ask another candidate if he or she agreed with that statement.  Or, “throw him a lifeline” as Moderator Max Frankel did during the 1976 Presidential debate when Ford said that Eastern Europe was not under the Soviet Union’s domination. The moderator followed up with an incredulous “Did I hear that right?” Unfortunately, Ford ignored the signal and gave a longer, more definitive statement of the same view.[xix]
Rest assured, if the candidates don’t get it right, we all know that the media pundits will set us straight in the post-mortem.

9) Perceived Bias. On the day before the 2008 VP debate, it gained wide media attention that Moderator Gwen Ifill had authored a new book The Breakthrough: Politics and Race in the Age of Obama, which was to be released on the day of the presidential inauguration.  Ifill did not inform the debate commission about her book and Fox News’ Washington managing editor Brit Hume claimed Ifill had a “financial stake” in an Obama victory because of the profit she stood to make from her book.  John McCain said he was confident Ifill would do “a totally objective job,” but stated, “Does this help that she has written a book that’s favorable to Senator Obama? Probably not.”[xx] Although a national poll held immediately following the vice-presidential debate indicated that 95% of viewers felt Ifill was fair and unbiased.[xxi]

10) Fail to Keep Law and Order. It’s a fine line to enforce the debate rules, encourage a robust debate, and intervene firmly to keep things on track. If too rigid, it’s a smackdown: the debate can feel staged, awkward, and contrived. If too loose, the candidates run wild:

11) Intervene the Exact Same Way. Republican Primary debate, June, 2011: John King was having a difficult time keeping the candidates’ responses under the 30 second limit. “Instead of interrupting the candidates forcefully, King would signal that their time was up by uttering ‘uh’ over and over again or repeatedly saying ‘all right’ or ‘OK.’”[xxviii] While there’s no way to know whether it directly impacted the outcome of the debate, “King did succeed in annoying many people who tuned in to watch the debate.”

12) Unequal Number of Questions and Airtime. Finally, one of the key skills for all debate moderators is the notion of “fairness.” Every single candidate should have roughly the same number of questions asked of him/her, the same type of questions (hardball to softie), and the same amount of time to speak.  And when that doesn’t happen it is becomes glaringly obvious:

One of these missteps isn’t a big deal.  However, when you combine several in the same debate, you have a mutiny.  If you haven’t already noticed in this article, the October 2015 Republican Primary debate was rife with these issues.  “Sensing weakness, the candidates proceeded to run roughshod over the moderators for the duration of the debate, ignoring their instructions to stop talking and adhere to previously agreed-upon time limits.”[xxxviii]

The RNC even pulled NBC out of the next debate: “While debates are meant to include tough questions and contrast candidates’ visions and policies for the future of America, CNBC’s moderators engaged in a series of ‘gotcha’ questions, petty and mean-spirited in tone, and designed to embarrass our candidates. What took place Wednesday night was not an attempt to give the American people a greater understanding of our candidates’ policies and ideas.”[xxxix]

And that’s what the debates are meant to accomplish: to allow the voters to get to know the candidates and their positions on key issues facing the country.  When the moderators fail, their debate fails the audience.

I’ll be watching and reporting on all the debates closely!  Stay tuned….the first debate is next Wednesday, June 26th.  I’ll be posting my thoughts here!

“A Panel of Five” Moderators for the First Democratic Primary Debate!?