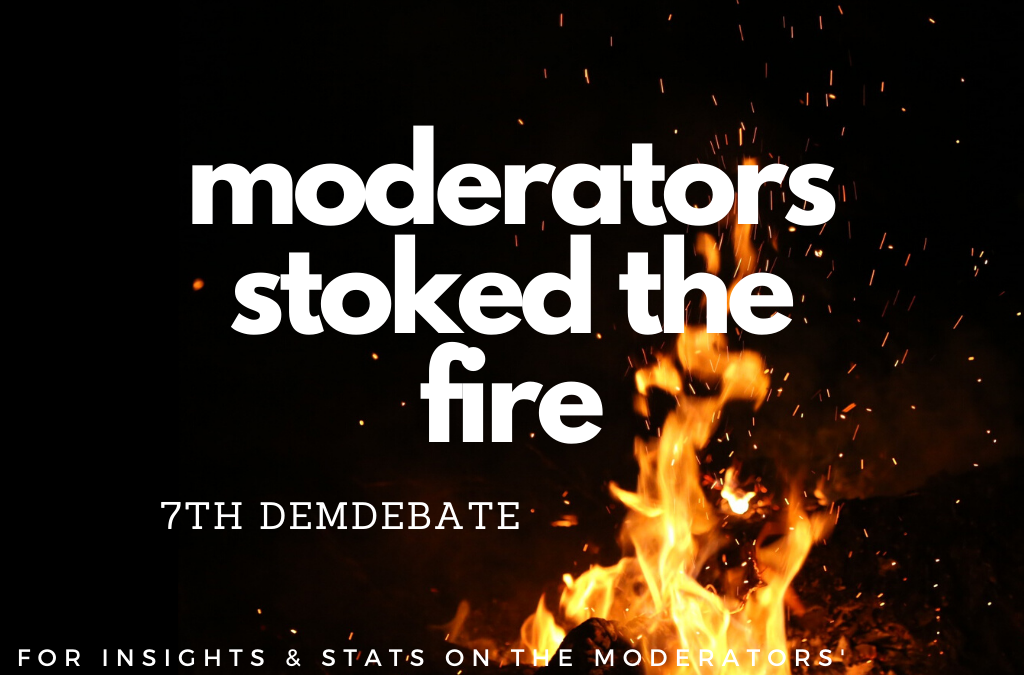 The 7th Democratic Primary Presidential Debate of 2020 will be known for the Sanders/Warren “spat” about Sanders’ (leaked) comment about whether a woman could win the 2020 election.  They quibbled over who beat a Republican incumbent in the last thirty (?) years (awkward)!  Then watch Warren approaching Sanders right after the debate – no handshake or signs of solidarity as they have done in the past.  Other than that, it wasn’t a particularly memorable debate.

It started with veteran debate moderator Wolf Blitzer asking each candidate some variant of the question, “You have a weakness….Why are you best prepared to be our Commander-in-Chief?”  It’s a new question for the debate stage, but rather pointless.  Reminds me of my high school election where the candidates are saying “Pick me! Pick me!”

Next, we covered foreign policy and nuclear weapons with a string of closed questions to get the candidates to declare a position.  For example, should we leave our combat troops in the middle east or withdraw them?  Would you use military force as a deterrent?  Would you meet with North Korea without pre-existing conditions?

When one question was not answered, Moderator Phillip followed up, “Mayor Buttigieg to be clear, would you allow Iran to become a nuclear power? Yes or no?” Gotta love that.  If you are going to ask a closed question (one that requires a yes, no, or one-two word response), you should get the answer.  Right?

Not so much.  For the first six debates, 70% of the questions were open-ended questions with only 30% being closed questions.  And of those closed-ended questions, only 55% were answered immediately.  14% were answered somewhere in the response and 31% were not answered.  And of those that were not answered during the initial response period, the moderators restated the question only 40% of the time.  That means the moderators let the candidates off the hook 60% of the time and moved on to the next question.

However, this debate (the 7th debate and first in 2020) was more like 56% open-ended questions and 44% closed questions.  That’s a striking difference.

And Moderator Phillip followed up a second time during the “spat”:

“So Senator Sanders, I do want to be clear here. You’re saying that you never told Senator Warren that a woman could not win the election?”

“That is correct,” Sanders said.

Phillip then turned to Warren. “Senator Warren, what did you think when Sanders told you a woman could not win the election?” Phillip asked.

The camera showed Sanders laughing in disbelief while Warren answered: “I disagreed” before calling Sanders her friend.

Although I wish Moderator Phillips would have followed up again to get a clear answer from Senator Sanders: “Why did you say that?” – but when is enough follow-ups enough?

While the first three topics were in the national headlines, what about topics that Iowans care about?  That’s where moderator Brianne Pfannenstiel entered into the conversation.  Her questions reflected issues Iowans cared about: trade and the USMCA, childcare, and climate change (although I have to think there were a ton of other issues….).  She was direct, kept the conversation moving, followed up if the candidate didn’t answer the question, and cut candidates off from talking. (Senator Amy Klobuchar went over time during every single one of her comments!) Especially since Moderator Pfannenstiel is a print journalist (vs. a television personality), she has been my favorite moderator by far!

Speaking of topics, I’m not sure the hypothetical questions about impeachment and “taking on Trump” really added to the conversation.  We have talked about impeachment in the last four debates.  I am sure their positions are relatively similar to each other and have not changed.  So why do we have to talk about it?  Oh yeah, because it’s the lead story in national news!

As far as airtime goes, this debate was far more balanced than past debates – much of this is based on the moderators’ skills, but also on the fact that there were only six candidates on stage:

All in all, the moderators tried to stoke the fire, but the candidates didn’t take the bait.  (Did I just mix metaphors there?) Don’t worry, we have THREE debates coming up in the month of February – potentially with a few more candidates on stage.