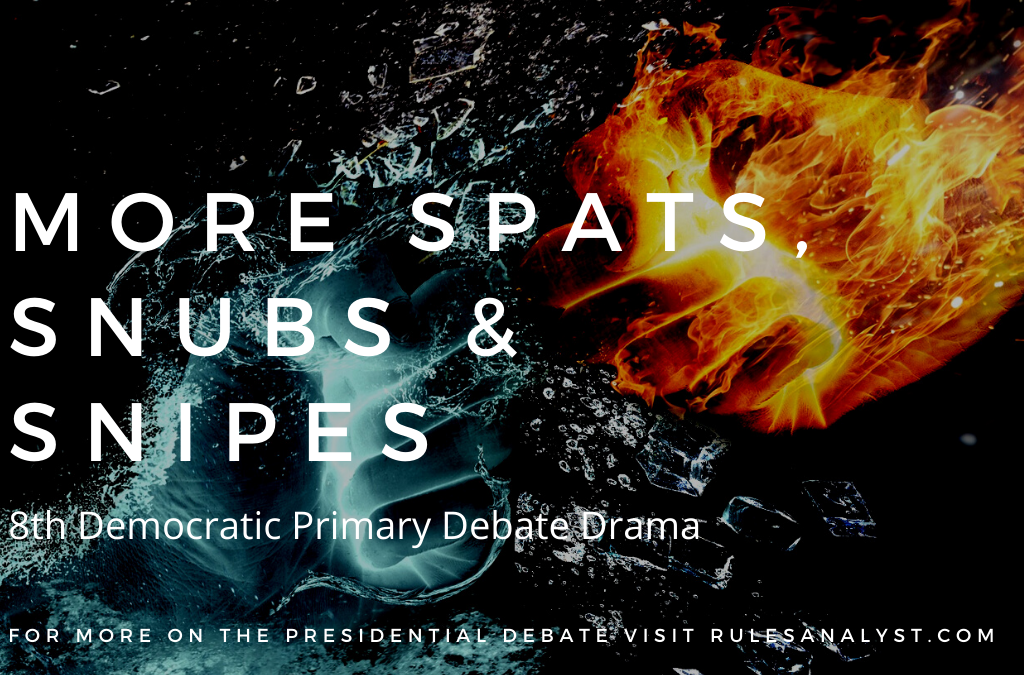 Aaahhh, the drama we have had this week: The literal tearing of the State of the Union speech, the interminable wait for the Iowa Caucus results, and the impeachment trial.  Add an unhealthy dose of coronavirus and Friday’s 8th Democratic Presidential Primary debate should be interesting.   Here’s why you need to watch the debate AND the performance of the debate moderators:

Biden Needs to Speak Up and Speak More

As the front-runner, Vice President Biden came out strong at the beginning of the debate cycle, but lately has not been as aggressive.  When asked a question, he answers it.  When named in a question or a fellow candidate’s answer, he provides a rebuttal.  The debate moderators allow him to add to the conversation a bit, but not tons (unless you look at Debate #7, where he didn’t talk as much as the other candidates, so the moderators HAD to call on him).  And he just doesn’t interrupt others.  He’s often said, “And I’m out of time” and just stops!

After Iowa, that will all change.  Even though he will still be in the coveted center stage position (his polling numbers still remain high), he’s going to have to assert himself into the conversation.  The debate moderators need to recognize him in order to speak or he’s just going to have to barge his way in (which really isn’t his style).  The moderators have much more control over who speaks and how much than we realize!

The Warren and Sanders Spat Continues

The last debate ended with Senator Warren approaching Senator Sanders snubbing the customary handshake at the end of the debate.  She said, “I think you called me a liar on national TV.”   Sanders rebutted “Let’s not do it [have the conversation] right now….” and then proceeded to accuse Warren of calling him a liar!  Oh the drama! Even though their microphones were muted, the sniping conversation was recorded.  And that’s the beginning of a visible rift that the debate moderators will dig in to during the debate.

ABC News chief anchor George Stephanopoulos, World News Tonight‘s David Muir, and ABC News correspondent Linsey Davis moderated the 3rd Democratic debate – so at least they have some recent experience.   In that debate, the scripted questions were evenly spread out among the candidates with the intention to clearly articulate and differentiate the candidates’ positions.  We’ll also have some new faces with local New Hampshire affiliate WMUR-TV’s Adam Sexton and Monica Hernandez – hope they ask questions New Hampshire voters care about!