Panel Moderators: You MUST Have an Emergency Action Plan 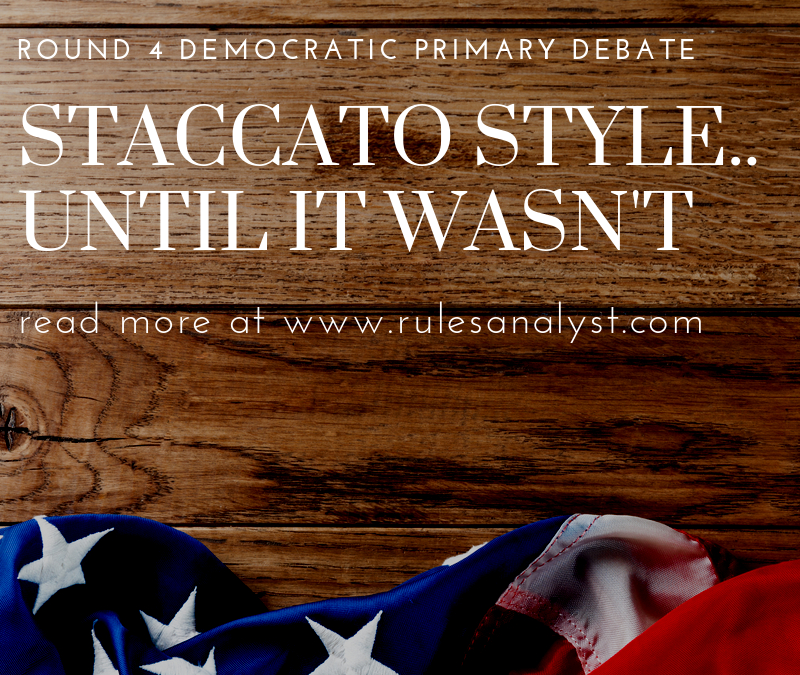 We just finished the fourth Democratic Primary Debate with the largest number of candidates EVER on the same stage (12) for the LONGEST amount of time (3 hours).  I was hoping for a change in format, so I was disappointed to hear at the onset that the ground rules were exactly the same as in the third debate (75 seconds to reply to a direct question, 45 seconds to respond or rebut and 15 seconds to respond to a follow up question).

I was also hoping that the moderators would create a more interesting format than the typical “ask a question, allow for a rebuttal and/or response.”  Again, I was disappointed.

BUT, I was delighted in the approach that the moderators took this time:

Rather than pitting candidate against candidate (like in Round 2), the moderators used a “staccato-style” approach where for each topic, the moderator would ask a carefully crafted question based on a statement, fact, or position geared to a specific candidate, followed with a crisp, “Please respond.”

In fact, the first question went through the entire line-up without one single rebut, response, or interruption!  Everyone had weighed in to each closed-ended question (about Trump and impeachment proceedings) within the first fifteen minutes!  WOW!!!!  (That’s a first since I have been covering the debates since 2016).

The questioning took a slight detour directed toward Vice President Biden and the appropriateness of his son’s activities while he was serving in the White House.  Moderator Anderson Cooper pre-empted the question by saying, “President Trump has falsely accused your son of doing something wrong while serving on a company board in Ukraine. I want to point out there’s no evidence of wrongdoing by either one of you.”  That’s just weird. Let Biden make these assessments.  Not the moderators.  Cooper then allowed Senator Sanders to respond and then passed the baton to Moderator Marc Lacey to launch into a new topic: “The Economy.”  There was a bit of crosstalk with an audible “it’s wrong to move on.”

And this is where the power of the moderator is most evident.  Moderator Lacey moved on to discuss the economy.  Further questioning about Biden and his son was extinguished.

The section on the “economics of healthcare for all” started with a closed question (yes or no) directed to Senator Warren – and because she didn’t answer the question, the moderator asked a follow-up question.  So far, so good.  The format is following the same staccato pattern…and then it didn’t.  The next question was directed to Mayor Buttigieg with a deliberate reference to Senator Warren.  So after Buttigieg answered the question, Warren had the opportunity to rebut his answer.  Which she did, and then Buttigieg responded to her!  Sanders then piled on, Warren responded, then Kolbuchar weighed in, Warren, Kolbuchar, Biden, Sanders and then Senator Harris took us into reproductive rights. Okay, time to move on.

Interesting…We finally got to see a bit of a “debate” – not just on the topic, but the differences in the healthcare plans.  Very intentional, deliberate, and set up by the moderators.  You see this pattern throughout the debate.  It’s staccato-style….until it shifts into debate mode.  Then the topic shifts and we’re into another staccato-style line of questioning.

But notice one other thing here:  It is the provenance of the moderators to select the person who answers the questions and who rebuts and responds. And by doing so, Warren dominated the debate:

When you look at the data below, you can see a stratification between top tier (Warren, Biden, Sanders) and the next level (Harris, Klobuchar, Buttigieg).  The rest of the pack simply didn’t get the same amount of airtime.

The moderators were much more effective at keeping the candidates within their time limits – although it took a few “Thank you’s” for Moderator Lacey to realize that he needed to be a little more forceful.  That being said, there were a few times where the candidates bulldozed past the time limits. Warren: “Let me finish please.” Buttigieg: “This is really important.”

I particularly liked the fact that the phrasing of the questions was a deliberate attempt to elicit more detail about the “how?” “what’s your plan?” “how will you tackle this problem?”

All in all, it was a moderately interesting debate (pun intended).  But it’s hard to dig into the meaningful issues with twelve people on the stage. So we’ll see what happens next month!

Round 3 Democratic National Debate Was Not Really a Debate