When Does a Panel Moderator Question Go Too Far?

Not Your Traditional Audience Q&A

This week, during a reunion panel of Scarface actors, the moderator, Jesse Kornbluth, asked a controversial question to Michelle Pfeiffer (who, BTW, I absolutely adore!).

He asked,  “As the father of a daughter, I’m concerned with body image, [During] the preparation for this film, what did you weigh?”

The actress, who plays Pacino’s character’s wife in the film, cocaine addict Elvira, was joined on stage by Pacino, De Palma, and Bauer, who looked visibly uncomfortable. The audience responded with loud jeers and boos, which was followed by immediate backlash on social media.

IndieWire reached out to Kornbluth for comment about the event, and he responded via email:

It is true that a gentleman should never ask a woman about her weight. But that was not my question. It is a comment on the knee-jerk political correctness of our time that no one would be shocked if you asked Robert De Niro about the weight gain required for his role in ‘Raging Bull’ but you get booed — not by many, but by a vocal few — for asking Michelle Pfeiffer about the physical two-dimensionality required for her to play a cocaine freak in “Scarface.”

Was this too personal? Too edgy?  Too non-politically correct?  What, precisely was it then?  Everybody (at least in my geeky panel moderation circles) is talking about it.

After the initial boos to his question, Kornbluth did offer a brief clarification, telling the crowd, “This is not the question you think it is.” (so what was it?)  He did not ask a follow-up question, according to IndieWire.

Pfeiffer eventually responded, “Well, okay. I don’t know. But I was playing a cocaine addict, which was part of the physicality of the part, which you have to consider.”

Was this an inappropriate question for the moderator to ask?  Especially since he was a last-minute replacement  (The originally-scheduled panel moderator, Brian Koppleman, evidently had a long-standing feud with Brian DePalma and was yanked off the program that morning).

What do you think?  Appropriate or not? 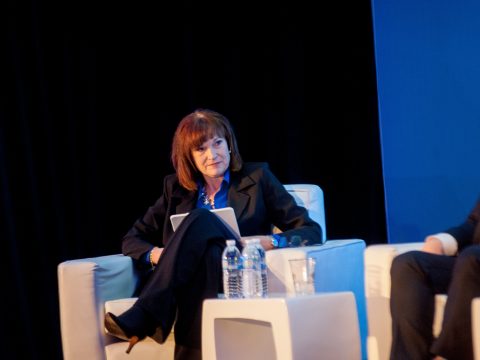